So I played a show at The Station Restaurant and Bar in Iroquois Falls, Ontario on October 10, 2009. It was a great time. Great crowd. And it was even for a great cause. The whole night was in support of a local dancer named Tre Shields who was raising money to go New York and dance on broadway. There was a tap dancing number between the sets of one of the earlier acts and then a few acoustic acts plaed then I finished off the night as best I could at 1:00 AM in a Northern Ontario Bar.

It was great to see family and friends and a sea of familiar faces singing along to all the tunes I was playing. I am planning on heading back to Iroquois Falls to play at the Station as soon as November. I wanted to go back for Halloween but on a stroke of good (or bad) luck for the folks of North Bay I will be playing at the good ol’ Underground that particular evening.

I am pleased to announce that I will be playing at the Underground with Jean Paul De Roover all the way from Thunder Bay, Ontario and The Rough Sea, from Ottawa.

I’m pretty excited about both acts but I’ve seen the Rough Sea before and I’m stoked to play with them.Local act Bohemian Cove will also be playing and the cover charge for this show is $5.

Here is a link to the event on facebook. I hope to see you there!

I had such a great time playing and singing at this show/party. When I play a set this good it makes me feel as though I have gotten away with something.

This was the first show I played in a very very long time and I couldn’t be happier with how the night went down. I was warmly welcomed by a lot of old friends and had a great time playing many of my old songs to the modestly sized crowd.

A couple times I was thrown by things but not as much as I expected from not having played or any time/resources to rehearse in a while. The first throw was working with a harmonica again. It had been a while and I wasn’t rusty at playing it but I was very rusty at playing it with the neck-holder (harp stand).  The second throw was the song Time and Change.  Most of the other songs are pretty simple and I was a little loose on the song because of that fact. 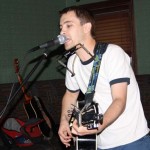 Ryan Problems and Travis Tiernay perform Nothing Compares 2 U

Buy it on CD:Amazon.ca
Buy the digital download iTunes| Amazon